Kia takes aim at sleek rivals with posh badges. Can the diesel Stinger hack it? 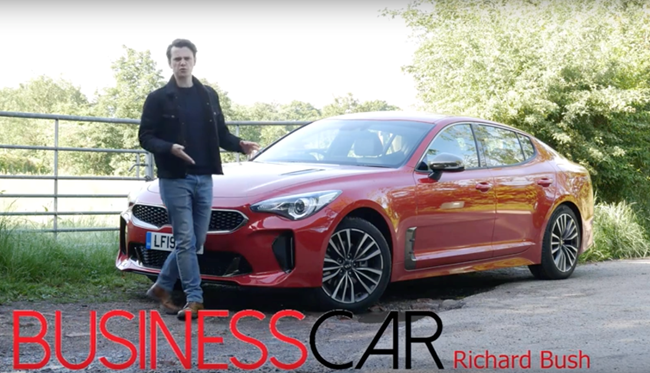 Kia proved to everyone that it could do sporty when it introduced its Proceed GT a few years back, and although the Proceed GT is more of a warm hatch than a hot one, it is another string to Kia's bow - and proof that it is a growing brand with more than just packed kit levels to offer.

Kia's latest sporty venture is its first rear-wheel drive production car to launch in the UK - the Kia Stinger - a five-door fastback with a V6 petrol engine in its range that looks to give BMW and Audi enthusiasts something to think about.

With a highly sculptured, concept-like exterior - not forgetting those (fake, but cool) nostrils on the bonnet - it is by far the most out-there Kia production car to date. We took the 2.2-litre diesel variant for a drive to see whether it can match the Germans for wow factor.

Aside from sprint times and body kits, a sports saloon isn't going to get anywhere unless it has a lavish interior to match. Thankfully, Kia has given it a good go with the Stinger.

The cabin of our test car came decorated in cream trim to match its couch-like seats, a feature that instantly instills a sense of luxury. There was also soft, padded material enveloping the air vents, stretching across to the passenger side. This flair sits alongside a typical logically laid-out Kia dashboard design, with just the right amount of buttons in all the right places.

At first, it seems pretty flawless. Under closer inspection, however, you will find that there are a few cheap, scratchy materials dotted around the cabin, some of which will likely put off those who frequent BMW and Audi showrooms.

But we feel the Stinger makes up for that with its brilliant amount of standard kit. All entry-level GT-Line Stingers get an 8in touchscreen with sat-nav, a reversing camera, Apple Carplay and Android Auto, an info display behind the steering wheel and heated seats.

Almost any car with a stylish, coupe-like roofline is going to struggle when it comes to headroom, and the Stinger is no exception. In the rear, six-footers will likely struggle to keep their hairdos intact, even more so if they sit in the middle seat. Legroom is ample though, and the slightly reclined position of the rear seats makes for a chauffeur-like journey.

Mathematically, the Kia doesn't have the biggest boot in its class, but with a wide opening, 406 litres with the seats in place and rear seats that fold almost flat, it is surprisingly practical for such a big, business-minded car.

With its rear-wheel drive set-up, fully independent suspension and limited slip differential, it is clear that Kia designed the Stinger to be driven enthusiastically, or at least driven with some gusto.

When tackling wide bends it feels solid, with plenty of grip and a natural feel to the steering that makes you confident you are in total control. The overall feedback and weight of the steering really is one of its best assets, even in the slightly heavier sport mode setting.

Start throwing that steering into a full lock on a few hairpin bends, however, and body control suffers slightly. At 1,800kg, the Stinger is quite a heavy car. Combine that with its suspension set-up, which is somewhat angled towards comfort, and you have got a bit of body lean and a car that doesn't feel as planted as, say, a BMW 4 Series Gran Coupe. This by no means makes the Stinger "un-fun", it just has clear limits when it comes to road driving. The flagship GT S version actually offers adaptive dampers, which gives sports car enthusiasts the chance to nudge the goal posts a little to allow for greater cornering capabilities.

The pay-off of the standard Stinger's tamer drive, however, is a middle ground between sports saloon and motorway cruiser, which gives it an admirable duality. On long-range motorway journeys, the Stinger's forgiving suspension and comfortable driving position make for a refreshing drive, while the 2.2-litre 200hp diesel plays into that cruiser character. The diesel may sound hoarse lower down the revs, but the eight-speed automatic gearbox is smooth right through the range, allowing for effortless overtaking when needed. It has still got plenty of bite when bouncing the rev counter though, allowing you to detour off the beaten track onto a B road if you fancy it.

The diesel offers attractive economy figures too, with Kia claiming an average of 40mpg. Judging by our tests, in which we were achieving 33mpg around town and 49mpg on the motorway, a 40mpg average sounds about right.