Citroen's SUV-looking C4 hatchback aims to conquer the comfort side of the market. 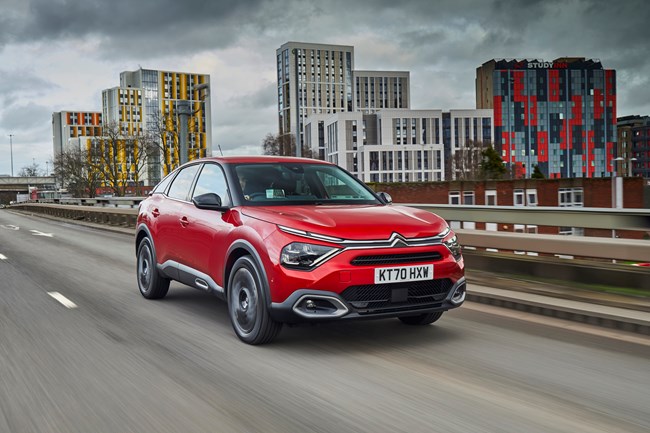 While many carmakers are still wrestling over the same piece of 'fun-to-drive' pie, Citroen has been steadfast in its commitment to comfort and no-nonsense family friendliness, with its latest C4 incarnation aiming to topple its German opponents in the hatchback segment.

And contrary to what the C4's raked roofline, chiseled bumpers and rear spoiler might suggest, this C4 is indeed a hatchback, not an SUV - according to Citroen. Regardless of what the brand says, however, this C4's roguish style will undoubtedly appeal to the droves of SUV-hungry families looking for curb appeal. Its petrol, diesel and electric powertrain line-up will also earn it brownie points among family units.

The C4's cabin is one of the most grown up interiors the brand has produced for years, being minimal and smart with just the right amount of quirky design cues to help keep things French. Even the family-proof plastics on the dash and doors have a textured feel to help alleviate any aura of cheapness. And thankfully, its minimal layout still includes physical climate control buttons for easy temperature toggling on the go.

Kit across the range is just as well-calculated, with all models getting a 10in touchscreen and digital instrument cluster, while the second trim up, Sense, will get you luxuries like a reversing camera, satnav and a head-up display. The touchscreen in the C4 isn't particularly intuitive, but it's simple enough to get to grips with.

A few must-mentions on the cabin practicality front include deep, travel mug-swallowing cup holders, a hidden storage pocket behind the gearstick and a built-in tablet holder on the passenger side dashboard - which is a neat feature, if not a little distracting for the driver.

The C4's inspired practicality ends there, however, with leg and headroom in the rear being aligned with that of an average-to-small hatchback, particularly when it comes to headroom, due to its highly-sculpted roofline. The boot offers a more rounded package, however, with a low load lip, adjustable boot floor, flat-folding seats and up to 1,250 litres with all seats folded down - or 380 litres with the seats in place.

It's worth noting that if you go for the electric C4, boot space remains exactly the same, which is quite rare in the EV world, which usually sees chunks of space sacrificed for batteries and other electrical gubbins.

Behind the wheel, the C4 is fairly unexceptional, which isn't necessarily a bad thing for a family car. The steering is light and easy to manoeuvre, particularly at low urban speeds, and while it tends to easily lean in the corners, you'll only really notice this at speed on winding country lanes.

The real champion of the C4 is its finessed Progressive Hydraulic Cushion suspension. This manages to keep everything from potholes to speed bumps in check without a hitch, and it won't jitter or shake over dodgy tarmac either. It's by no means revolutionary - but it helps the C4 compete with its comfort-monopolising German rivals.

The C4's compliant ride makes it a good fit for either of its available powertrains, with the 1.5-litre 110hp BlueHDI diesel we tested offering enough poke for junction jumping and overtaking, and fuel economy that sits anywhere between 50 to 70mpg. We tried this diesel alongside a six-speed manual transmission, which is okay, but typically Citroen - which is to say its long throw and clunky operation make for a slightly labour-intensive experience. If you have the option, go for the auto.