The Mazda3 continues to offer something a little different in the hatchback market, skirting dullness for dynamism. 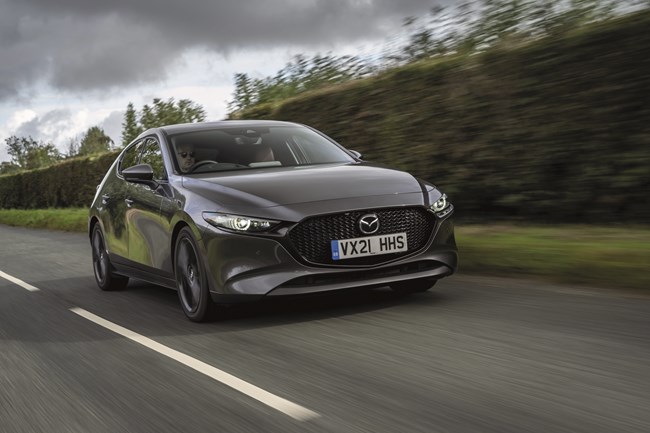 Mazda has long had a reputation for offering fun-to-drive cars that prioritise driver enjoyment over everything else. And with increasing pressures to conform to emission standards, practicality benchmarks and tech thresholds, you'd think Mazda would have thrown on the brakes of its bohemianism. Nope.

The Mazda3 hatchback is a prime example of the Japanese brand's reluctance to follow the crowd, with an engaging drive and large naturally-aspirated powertrains underpinned by one of the best-looking design languages on the market.

Each engine in the Mazda3 range is a naturally-aspirated 2.0-litre petrol unit, with both 122hp and 186hp options available. Rather confusingly, there are two slightly different flavours of petrol on offer; e-Skyactiv G and e-Skyactiv X - the latter promising to offer similar fuel-saving characteristics to that of a diesel unit.

Thanks to some fuel-efficient engineering, such as mild-hybrid tech, cylinder deactivation and the addition of compression-controlled spark ignitions, Mazda has managed to avoid downsizing and turbo-charging its engines. The result is fairly impressive fuel economy - around 45 to 55mpg across the range - and performance that requires you to wring the engine in order to get any semblance of fun out of it, which for many, is part of the appeal of naturally-aspirated units.

When compared with other family hatchbacks, the steering in the Mazda3 is slightly on the heavier side - certainly meatier than that of the Ford Focus. Combined with its lively character when tweaked off-centre, and its tendency to snap back to the 12 o'clock position after a turn, there's an urgency to it that encourages you to drive with zest. It's still not as sweet and accurate as the Focus', but it certainly exudes enjoyment.

To match its propensity for enthusiasm, the Mazda 3's ride is on the firmer side, which can send vibrations through the cabin when on scrappy tarmac, but when it comes to handling large bumps and potholes, it's surprisingly well finessed.

The Mazda3's biggest badge of honour with regards to its drive, however, is its six-speed manual gearbox. With a clunky, mechanical feel and short throw, it's reminiscent of the Mazda MX-5's excellent transmission. This best in-class gearbox physically and mentally engages you in the drive and perfectly epitomises the Mazda 3's credo. There is also an automatic available - but we'd recommend the manual, hands down.

At a glance, the Mazda3's cabin looks a little bland and bare, with very few buttons and toggles, and a lot of black trim. We'd argue that it belongs in the clean-cut and minimalist column, however, as its simplistic layout, up-market build, slick rotary dial, undemanding infotainment system and superb driving position emit an overall sense of ease and comfort.

Standard kit across the range is pretty impressive too, with an 8.8in infotainment screen, satnav, Android Auto, Apple Carplay, DAB radio, a colour head-up display and adaptive cruise all thrown in.

The main area where the Mazda3 undeniably lacks, however, is practicality - thanks in part to its concept-like exterior design. Head and leg room in the rear seats is okay for smaller, sub six-foot adults, but anyone over that is going to struggle. The large transmission hump in the floor also makes moving around - and life as a middle passenger - pretty difficult.

Things aren't much better in the boot either. While on paper its 351-litre boot isn't bad - although it is still smaller than the Ford Focus and Volkswagen Golf - its narrow opening and high load lip make shopping trips a little awkward. Still, the seats fold down nice and flat, and the overall shape of the boot is easy to work with.