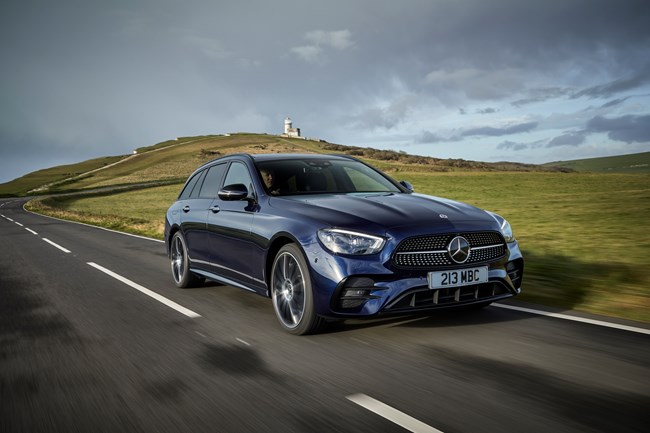 Large, executive plug-in hybrids from premium brands have become fairly commonplace in the new car market, with the majority belonging to the petrol side. Mercedes-Benz is one of the exceptions, however, with its E-Class available as both a petrol and diesel plug-in hybrid - the diesel variant reserved for the estate style only.

With regards to the diesel plug-in, or the E 300 de as it is known, you're looking at up to 33 miles of all-electric range, upwards of 55mpg in hybrid mode and one of the best interiors around. And, in an attempt to give the E-Class an extra boost in appeal, Mercedes treated it to a mid-life facelift in 2020, with a new grille and LED design, and upgrades to its interior tech.

The big new addition to the E-Class' cabin is the latest touchscreen version of the MBUX infotainment system, which is available as part of the standard dual 12.3in dashboard displays. This offers all the tech that we've come to expect from a Mercedes, but throws in simple touchscreen controls for usability, something the pre-facelift version of the system was lacking. This sits alongside a new steering wheel design, which boasts a series of touch controls. At first, the controls are a little overwhelming, but in practice, they work a treat.

This new steering wheel's touch controls allow you to navigate the main infotainment screen as well, meaning there are three different ways of toggling through menus: the steering the wheel, the touchscreen itself, or the clicky touchpad on the centre console - which, admittedly, is a bit fiddly.

It's worth noting that while the spacious rear seats of the E-Class are unaffected by the hybrid's batteries, the same cannot be said for the boot. Due to the required battery space, the plug-in hybrid estate loses out on around 200 litres of boot space, leaving a somewhat compromised 480 litres, due to the large hump in the middle of the boot.

The battery in question is a 13.5 kWh unit, which sits alongside an electric motor and 2.0-litre diesel engine, producing a total power output of 306hp. Power is channelled through a smooth-shifting, nine-speed automatic gearbox, and the switch from electric to diesel power is seamless, almost completely unnoticeable in fact.

A full charge from a standard three-pin socket will take five hours in the E 300 de, but can be reduced to two if a home charger  is fitted. Mercedes reckons you can get 33 miles of full-electric from a single charge, but we found it to be closer to 25-30 miles.

Its electric and diesel juggling hybrid mode is where the E-Class really excels though. On an average 70mph journey, we found that 55mpg was effortlessly achievable. Throw in a few 50mph smart motorway jaunts and that figure will likely stretch to 70 or 80mpg. Realistically, with a mix of urban and motorway driving, you'll likely see an average of 55-60mpg - especially if the battery is topped up at home.

But does a plug-in hybrid Mercedes still feel like a Mercedes? This one does. With its impeccable electric-to-diesel power change, well-insulated cabin and forgiving suspension, the E 300 de simply glides along. And when overtaking on the motorway, you'll be surprised at how the nine-speed auto will flick through the gears, in true outside lane-dwelling fashion.

It even feels confident on twisty roads, with accurate steering that sharpens up just off-centre. The only downside we found was some tyre roar on certain road surfaces, although these were few and far between.

We're also fans of how Mercedes incorporates its long list of driver assist features. Although the E-Class boasts all sorts of pop-up camera angles at junctions, lane keep tech and blind spot monitoring, they are far less intrusive than other systems.