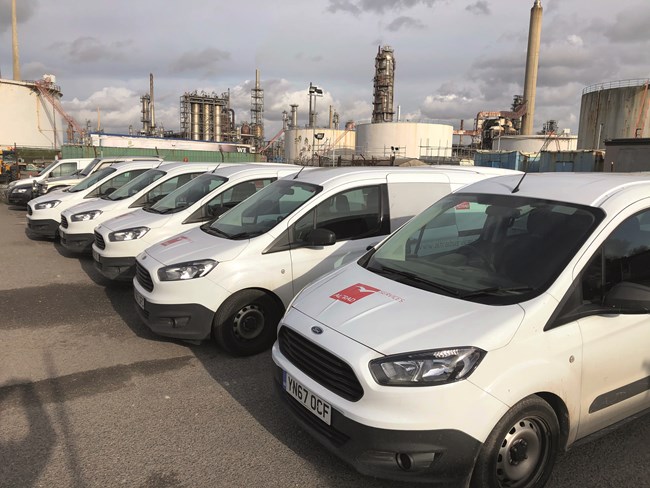 Matthew Hammond took on the role of head of fleet at Altrad Services UK in September 2014. Since then the company has grown significantly. In 2018, it consolidated three of its owned businesses to create a single entity that today manages a fleet of over 1,200 vehicles, leaving Hammond with a pretty big job on his hands.

He is responsible for many areas, notably cradle-to-grave management procurement and the management of the Altrad fleet across the entire country, which includes cars, vans and HGVs.

Hammond takes his approach to vehicle management seriously, employing a number of methods to monitor the safety and performance of all the company's vehicles. His hard work was recognised recently when he was awarded the Business Car Fleet Manager of the Year award.

Despite still being primarily a diesel fleet, Hammond says that a big focus of Altrad recently is its electrification plans. At present, around 95% of Altrad's fleet is diesel and the other 5% is taken up by hybrids, both plug-in and non-plug-in, and the most recent additions to the fleet: three electric vehicles.

"We're in the process of figuring out what fuel technology to concentrate on in the coming months and years, and we have made a pledge to procure 60 electric vans onto the fleet by the end of the financial year, August 2021, and then we want to reach 60% electrification of the van fleet within three years," Hammond says.

In an effort to switch more of the car fleet over to electric, Altrad has stopped ordering any diesel or petrol-only models, instead opting for hybrid with the intention of moving to a fully electric list within the next 12 months. "You've got to jump or not jump," Hammond explains. "You can put every excuse on the table as to why it's not the right time to go, and - to be honest - I still don't think it is the right time, but in 12 months' time we'll be a lot closer. I think you have to put your toe in the water and just know that there will be obstacles in there."

One of these obstacles Hammond is referring to is infrastructure: "This is an issue that we will have to overcome in the next 12 months and ensure we roll out the chargers across our locations. We've been looking at this for the last six months and the conclusion we've reached so far is that one size doesn't fit all."

Hammond explains that a significant challenge Altrad has seen with its business is that its drivers work on client sites, so digging up ground to install fixed charge points on those sites is never going to happen. "We've been looking at ways around this, however, and we've come up with a portable commando-style smart charge lead, which has been introduced on the vans we have on fleet and will be rolled out across those sites where we don't own buildings but where we have our own offices - around a dozen sites across the UK," Hammond says. "Firstly, we will look at where we can easily install charge points and then we will revisit more difficult ones after that and see what we need to do to get them up to speed. We're currently busy speaking to various suppliers and companies that can support us and guide us. It's going to be costly but it's an upfront cost we have to accept because of the long-term benefits it's going to provide us with."

Upfront cost is something that's troubling Hammond in his electric vision, but he realises that a more long-term view is necessary: "All the numbers seem to point to cost savings, but at the moment the cost of the vehicle is counterproductive as it's still too high - we hope that as we move further into electrification that more affordable cars will start to come through. We'd need to be looking at cars from £30,000-£45,000, and only then would the TCOs stack up and verify the cost of the charge points."

Similarly, Hammond notes that cost savings aren't going to show up immediately in one cycle over a three-year lease. "It has to be looked at with more of a seven-year cycle in mind and the benefits to your business of making the switch to electric. The reality is, the world is changing - forget 2030 legislation - we have to make this switch nonetheless as it's the right thing for a business like ours to be doing. We're considering the environment and our impact and we want to make a difference, and if we don't set a date, we'll never do it," he says.

Going forward, Hammond believes the biggest opportunity for his fleet is to become green: "On the environmental side, we want to drop 300t of CO2 on the fleet, which is achievable if we hit the numbers we want to hit on our electrification target within two years. We can look at how we can use the fleet differently - where we can have electric vans and cars and where this isn't possible; we're [also] considering biofuels instead of traditional diesels, and the cleanest Euro6 engines. There are many stages between dirty diesel and electric to explore and having such a wide, varied fleet gives us an opportunity to assess where we can answer the current question, the five-year question and even the ten-year question."

It's a similar story around the globe, but another significant, recent obstacle for Hammond's fleet is Covid.

"The roll-out of the electric vans should be much further along - in fact, [though] we planned to have 60 on the fleet by the end of this year. with everything that's gone on with the supply chain it's been pushed back. We're behind our targets," he explains.

But on the plus side, Hammond says the initial lockdown in the UK gave him and his team time to think: "We suddenly didn't have the hectic day-to-day routine and business levels dropped. I was fortunate that I didn't get furloughed so that gave me time to look at what I was doing and what I had to do - step back and look and think longer term. We've been able to put our long-term goals in place, how we're going to achieve them, where we are as a business and where we want to be, and start putting some more strategic goals in place to move forward with."

With his large fleet, Hammond was keen to reduce incident numbers across the business and understand why they were happening and what the firm could do to help prevent them.

"In 2017, we began working with telematics specialist Trakm8, who could provide detailed driver behaviour analytics for our fleet, allowing us to identify patterns of behaviour, identify high-risk drivers and, through education, make them better drivers," says Hammond.

"Telematics is an area I really believe from a fleet viewpoint that we should be embracing. We use telematics to guide our driver trainers, our e-learning courses, and for one-to-one interaction with the drivers, which we have seen some really great results from. For example, we've seen our driver scores improve from the mid 60s up to the high 90s and our incident rate drop from around 32% to around 12%."

Now, Hammond says Altrad is at the stage where it's looking at what's next. "The thing with telematics is if you use it right you can get some very good results and you can get some great insight and visibility of your fleet. But you have to look at where you're going and what you want to achieve. You can't just say 'great' and stop there," he says.

"We've had some great success and I want to have more and take it further, into single figures for our incident rates and improve that driver score so our fleet is performing as safely as it possibly can."

Next for Altrad is looking at how it uses different technology to reach the drivers that it hasn't impacted with telematics so far. Hammond says: "We're looking at things like in-cab cameras, so we can look at real data from incidents or events to see what the driver was doing. If the driver was distracted, we can sit with them and use real data and evidence to go through where they can improve and educate them." He and his team are also looking at light bars as an in-cab driver aid, where the good and bad driving is monitored and presented in real time rather than providing them with data reports after the event: "We think that if you provide instant feedback to the driver then it's more likely to see instant results because they can really understand where the errors were."

As part of Altrad's telematics push, it has put in place a lot of in-house training and e-learning courses for its drivers. Hammond says: "We were sending data out to third parties, but have now decided to keep it as very much an in-house process to develop, to train our drivers and do one-to-one assessments with them to keep it a bit more approachable and light rather than a heavy session."

As for how Altrad's fleet has reacted to the introduction and ramping up of telematics within the business, Hammond explains that when the company began to integrate it across the fleet, nobody wanted it: "As you can imagine, they all thought it was Big Brother watching them; however, I made it very clear that we have a fleet of over 1,200 vehicles - I don't know what shift every individual person is on or what sites they're on as that's not what it's about. We entrust people to do their job. What we were purely interested in was driver standards and improving these and reducing incidents. If you start picking on their driving style they get defensive, but when you sit with them and explain the data, and they can see what you're hoping for, they become a lot more receptive. It's not so much the technology but how you use and present it that's really going to make a difference to fleet safety and your drivers."

When asked what his upcoming goals are, Hammond repeats that he wants to get the fleet's annual incident rate down to single figures. "It's already significantly decreased from 32% to 12%, so that next 3% is our next aim. Similarly, our incident split between driver fault and third party is currently around 60/40, and I'd like to get that down to 50/50 ideally," he says.

As for his biggest achievement since he's been in his role as head of fleet, Hammond refers to the fleet's accident statistics: "We've saved, and will continue to save, a considerable amount of money by reducing our incident numbers, we have better management of the fleet by our understanding of behaviour, and we've had fewer incidents. We have a much safer, more efficient fleet than before I was here. That has been my biggest achievement and I believe it will also be my legacy."