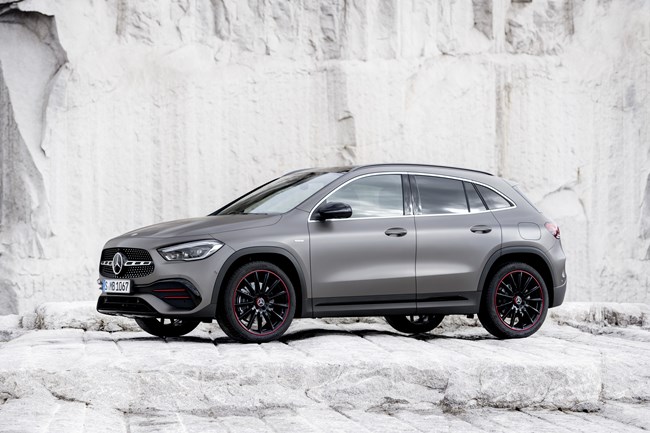 Mercedes-Benz has unveiled the new, second-generation version of its GLA SUV.

Compared with the outgoing model, the new version of Mercedes's entry-level SUV is more than 10 centimetres taller, and also one-and-a-half centimetres shorter.

Mercedes says it offers more headroom in the front, and also more rear legroom, while boot capacity has increased from 421 to 435 litres.

Launch engine options are a 1.3-litre, 163hp petrol engine, and a 2.0-litre, 306hp petrol, the latter in the Mercedes-AMG A35 performance model, which also has four-wheel drive.

Mercedes says a plug-in hybrid version is also in development.

The interior features Mercedes's now-familiar MBUX infotainment system, with a pair of 7in screens, one or both of which can be specced up to 10.25in.

Autonomous emergency braking comes as standard, while the additionally-available Driving Assistance Package comes with extra features including a turning manoeuvre function, an emergency corridor function, an exit warning function which alerts the driver to approaching cyclists or vehicles, and a warning when pedestrians are detected near zebra crossings.

The new GLA is set to go on sale in the spring. UK specs and prices are yet to be announced.