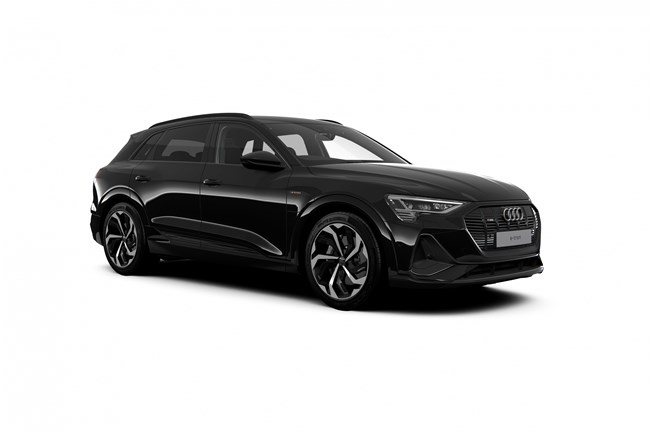 Audi has announced new equipment grades for its E-Tron electric SUV, alongside an upgraded infotainment system and a new charging service.

Black Edition is based on S Line spec, but with a black finish applied to its 21in alloy wheels, front grille, front and rear bumper inserts, roof rails and door mirror surrounds, while inside there are sport seats with powered lumbar adjustment.

Vorsprung spec gets 22in wheels, and slim virtual door mirrors, housing HD cameras that transmit images of the car's surroundings to OLED displays on each side of the cabin.

The Vorsprung also comes with digital matrix LED lights, which can be adjusted up to 5,000 times per second either to direct light onto the road or to avoid dazzling oncoming traffic.

There's also a lane light feature that brightly illuminates the lane the car is driving in and adjusts dynamically when lane changes are made, and an orientation light feature that supports the lane departure warning system by using darkened areas to predictively show the car's position in its lane.

It has also launched a new charging service, allowing drivers to subscribe for a payment card accepted at charge points operated by 18 suppliers in the UK and Europe, with a choice of two fixed price tariffs.

Audi says UK fleet and retail customers who order an E-Tron before the end of this year will get a free 12-month subscription to the service and an account credit equivalent to 1,000 miles of electricity.