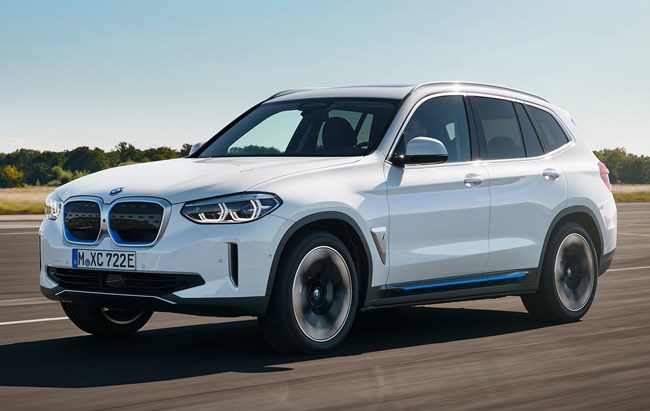 BMW has revealed the iX3, an electric SUV it says will have a range of up to 285 miles on the WLTP cycle, and produce 286hp.

Based on the conventionally-powered X3, BMW says the newcomer is powered by the fifth-generation version of its EV technology, and that the power density of the electric motor is 30% greater than in its current models.

Like most EVs a regenerative braking system helps keep the battery topped up when driving, but BMW says the iX3's can adapt itself to the road situation based on data from the sat-nav and driver assistance systems, although manual adjustment of the regeneration effect will also be possible.

BMW says driving dynamics and ride comfort will be optimised by standard adaptive suspension, while cornering will be aided by a centre of gravity around 7.5cm lower than conventionally-powered X3s.

Distinguishing exterior design features of the iX3 include a largely-enclosed front end, more aerodynamic rear end, and aerodynamically designed light-alloy wheels, with the latter said to reduce drag compared with a conventional design by around 5%.

It will run on a 12.3in driver display and a 10.25in touchscreen, with gesture control and what BMW bills as improved voice control possible.

The iX3 will be BMW's first model to be built for export at its factory at Shenyang in China.

It is due to launch in the UK in summer 2021. Prices and specs are due to be announced in autumn 2020, when pre-orders will also open.