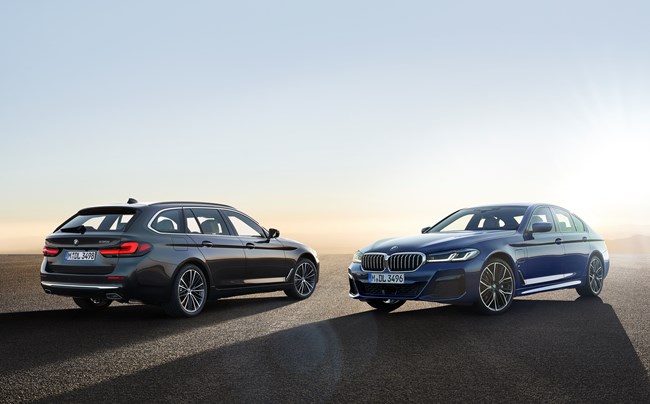 BMW has refreshed its 5 Series large executive saloon and estate with updates styling, a larger infotainment screen and mild hybrid assistance on nearly all non-hybrid models.

Many will breathe a sigh of relief to learn that the 5 Series hasn't received the huge kidney grill that BMW is rolling out on many of its new models. Instead, the changes are fairly subtle - as they generally are when the 5 Series is facelifted - with redesigned light signatures and bumpers. As an option, BMW now offers front laser lights.

The central infotainment screen grows from 10.25in to 12.3in and now features Apple Carplay and Android Auto. BMW used to only offer Apple Carplay, and even then, at extra cost. The 'iDrive' gets the latest operating system and can still be controlled through either the touch screen or using the typical rotary controller.

The engine range sees the addition of a new six-cylinder plug-in hybrid in the shape of the 545e xDrive, and a range-topping 550i xDrive. The 545e uses a similar powertrain to the X5 45e, combining a 3.0-litre six-cylinder engine with a battery and an electric motor for an electric range of 33-35 miles, depending on spec.

The new hybrid is only available as a saloon and with all-wheel drive, but the 530e, which has been in the range for longer, can now also be ordered as a 'touring' estate, and with either rear- or all-wheel drive.

The rest of the range is largely as it was before, with entry-level four-cylinder 520i petrol and 520d diesel models, with the more powerful six-cylinder 530d and 540i above those. In the UK, the six-cylinder models are only available with all-wheel drive, and the 540i is, for the moment, at least, only available as an estate. New for the UK is the V8 550i, but it has little relevance for fleets.

All non-plug-in hybrid models now get assistance from a 48V mild hybrid system to curb fuel consumption and emissions. It also looks like the 530i, a more powerful version of the 520i, will not be offered in the UK anymore, at least not from the start.

Buyers will have the choice of three equipment grades. The base SE will feature 17in alloy wheels, heated leather seats with adjustable lumbar support, electric folding mirrors and on the estate, an electric tailgate.