Is the new Mazda3 good enough to take on its fierce rivals?

The fourth-generation Mazda3 arrives in the UK this spring, but more significantly it is the first in a new cohort of models from the brand.

The first two Mazda3 models shared some components and technology with the Ford Focus and Volvo's smallest vehicles, but since 2012 Mazda has developed new models independently using its 'Skyactiv' philosophy of reducing weight to aid efficiency.

It has offered fleet appeal over the years, but often loses out because Mazda is unable to compete with larger brands in terms of discounts. That is not necessarily a bad thing as it has helped shore up residual values, and for SMEs it has still offered a competitive proposition compared with its main rivals.

With a new design replicating Mazda's Kai concept car of 2017 showing off smoothly contoured edges and a sloped roofline, it hides the second-generation Skyactiv platform beneath its body. But for the car to succeed in this hotly contested class, looks alone won't cut it; the new Mazda3 needs to be a seriously accomplished all-rounder. 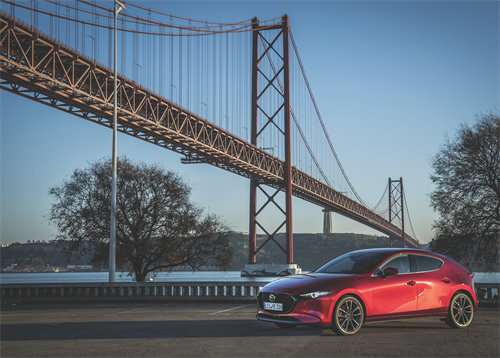 Although the models we tested at the car's launch in Europe weren't identical to UK equipment grades, we were told the manufacturer expects to sell cars to fleets towards the middle/higher end of the range, and reckons the bestselling derivatives to be SE-L Lux, Sport Lux and GT Sport, all of which have a significant amount of equipment included. The cars also all have a high level of kit that comes as standard throughout the range, including a head-up display and 12 Bose speakers dotted around the car.

Fleet sales are initially planned at 23% of the Mazda3's overall volume, although it is predicted they will continue to grow with the introduction of Skyactiv-X, which will launch later in the year in the Mazda3. This will be a petrol engine that offers many of the benefits of diesel, but there will be separate launch activity for that.

For now, the engine line-up consists of a 2.0-litre petrol unit and a 1.8-litre diesel. Both engines have a mild hybrid system that runs the electrics from brake regeneration too, while the petrol has cylinder deactivation technology to save fuel. As diesel currently accounts for only 8% of the total Mazda3 range, we got our hands on the petrol unit at the international launch of the new car. 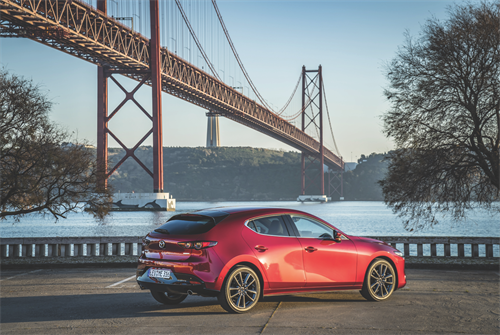 The engine is smooth and has enough power to make reasonable progress, but we couldn't help but notice that it takes a while to get up to speed when moving from rest, meaning you have to throttle down quite a lot and push the automatic transmission, which seems like it needs shocking into action. This can be a chore and leaves you questioning what would be a non-risk overtake in a more powerful car.

There is a six-speed manual transmission too, and due to the ponderous nature of the auto, the manual is the better pick of the two.

Luckily, the new Mazda3 is a much quieter car than its predecessor. Even at motorway speeds, wind and road noise are really well suppressed, and an obvious lack of suspension noise will come as a welcome respite while on the road.

The steering is direct and responsive, and body roll is kept to an impressive minimum, even on tight turns. Lower-grade models will have smaller alloy wheels, which we think may soak up road surface lumps and bumps well, as the larger alloys on the sportier grade we tested can bring any imperfections on a poorly surfaced road directly into the cabin.

The dash only really has controls for the air-con functions. Everything else can be operated by the steering wheel buttons and the rotary push-and-turn dial near the central panel, which is really easy to use once you get the hang of it. The car features plenty of soft-touch plastics at the top of the dash and on the doors and, even at lower levels, where the plastics are harder, they feel of good quality. 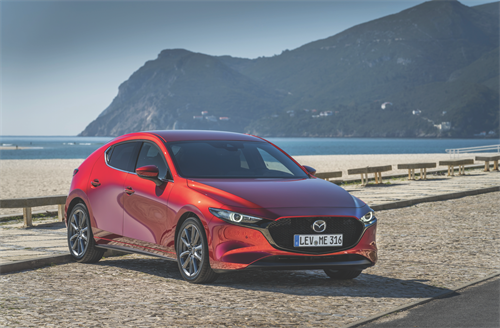 The central storage bin is pleasingly deep, and contains USB sockets, a memory card slot and a small tray for your phone, all very handy features for the driver to have. Each door will take a medium-sized bottle of water and there are two cup holders in the middle too.

The standard 8.8in widescreen display offers a split-screen view and improved operability compared to its predecessor, and it is also far easier and nicer to use than Ford's Sync system. As well as the standard head-up display on all models, there is also LED headlights and adaptive cruise control, meaning Mazda hasn't held back on its standard offerings in this car in order to make it a fierce contender in its class.

The seats feel quite comfortable on a long drive, and the cabin is a generally pleasant place to be. Something we noticed is that the indicators are weirdly quiet, even without music on in the background, making you feel the need to check a few times that they are actually on, which is a bit unsettling.

Even though it is an improvement on the previous model, in its current guise the Mazda3 may still lag behind the class leaders in a few areas. However, Skyactiv-X could well change all that when it arrives later in the year.