Diesel has long been the default choice for fleets choosing family cars like the Qashqai, but we try a new petrol version. 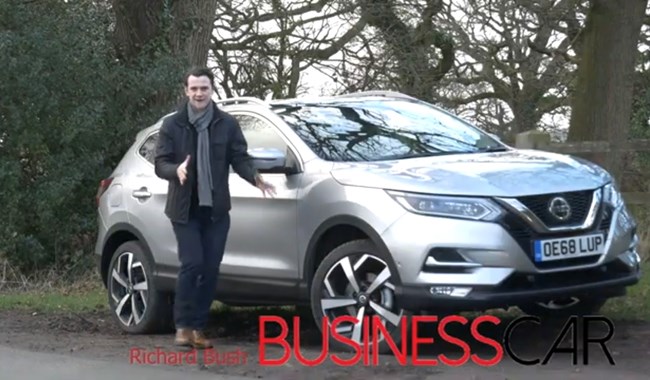 The Nissan Qashqai is as ubiquitous to the crossover market as the Volkswagen Golf is to the hatchback one. Sure, the Qashqai didn't invent the idea of merging SUV and hatchback DNA, but it certainly made it trendy, becoming the first big-selling, mass-produced SUV of its kind.

But with crossovers becoming so incredibly popular, Nissan may just end up becoming a victim of its own success, with countless competitors looking to topple it. And with the current Qashqai dating back to 2014 - with a minor facelift in 2017 - it could certainly do with a fresh approach if it's to fend off the likes of the Peugeot 3008 and Volkswagen Tiguan.

One thing's for sure, Nissan got the quality side of things pretty spot on when it launched the second-gen Qashqai in 2014. It's no luxury, German-branded car, but the Qashqai's interior serves up a perfect mix of soft-touch and hard-wearing materials, ideal for busy families. And those soft-touch materials are situated where it counts, too, on the doors and the dash.

On the design side of things however, it could really do with a revamp. Just to be clear, the Qashqai's touchscreen is logically-designed - connecting a phone is easy and all the buttons do what they're supposed to, which can't be said for some of the convoluted, space-age systems in other cars.

But with a multitude of buttons surrounding the screen, old-school orange ambient lighting and underwhelming graphics, the Qashqai feels miles away from the likes of the Peugeot 3008. One can only assume that Nissan decided not to tinker with the interior design too much as it intends to reveal a whole new design approach come the third-gen model.

Aside to the slightly dated design, the Qashqai's kit levels are impressive. All Qashqai's get Bluetooth, cruise control, LED daytime running lights and hill start assist, which alongside its numerous cubbies and large amount of armrest storage, give it a big tick in the family friendly department. As with a lot of other family cars, equipment comes in dribs and drabs when you start climbing the trim levels - with the main benefits of our Tekna model including Nissan's Around View camera and heated seats. If you're after value for money with equipment, go for the mid-range N-Connecta model.

Rear passenger space in the Qashqai is excellent, with the only qualm being headroom when the optional panoramic glass roof is fitted. Boot space is impressive too, with up to 1,585 litres of storage. Also, thanks to an adjustable boot floor, there is no load lip, which makes loading large objects very easy. And the parcel shelf fits under the false floor too.

Conservative rather than crazy

As a rule of thumb, crossovers don't tend to be particularly exciting behind the wheel and the Qashqai is no different. Although it feels surefooted on the majority of roads, with a supple suspension - avoid the larger wheels - and nicely-weighted steering, the Qashqai doesn't like to be thrown into corners. And when combined with its slightly notchy six-speed manual gearbox, it's clear that the Qashqai is meant for calm, family driving, rather than adrenaline-fuelled, country road jaunts.

With a greater industry focus on small petrol engines potentially replacing large diesels, Nissan introduced the turbocharged 1.3-litre DIG-T towards the end of 2018. With 140hp, this 1.3-litre certainly feels more utilierian than sporty, although it has enough gusto for an overtake if you drop a gear or two.

The slightly disappointing aspect of the 1.3 DIG-T however is its fuel economy. On paper, it claims to deliver an average of 49.4mpg, but after a mixture of motorway and town driving, we were getting between 30-35mpg, or 40mpg after a considerable amount of motorway miles.

Data correct at the time of evaluation.