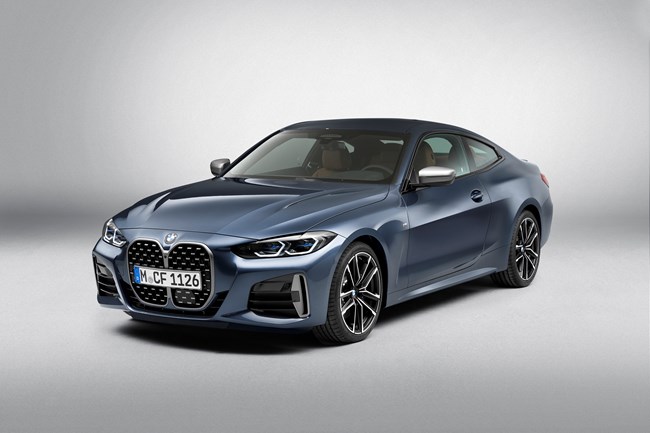 BMW has presented the coupe version of the 3 Series saloon, the 4 Series. It shares most of its technical specification with the saloon, but features a very different design.

In time, the 4 Series will in all likelihood also spawn a 'Gran Coupé' version, with much the same styling, but with four doors and a rear tailgate. The two-door is set to go on sale in October, with the entry-level 420i costing £39,870.

The biggest talking point for the new BMW 4 Series is undoubtedly the design, which features a very large, upright version of the brand's traditional 'kidney grille'. Despite being the two-door version of the 3 Series, it is about 60mm longer than the saloon, though it has the same wheelbase. It's also slightly wider, at 1,852mm, and lower, at 1,383mm.

It uses mostly the same powertrains as the 3 Series, although it forgoes some of the lower-end units, as well as manual transmissions.

There are two 2.0-litre four-cylinder petrol engines, the 420i and 430i, with 184hp and 258hp. These are the only engines in the line-up that don't have mild hybrid assistance. They are also the only two that can't be combined with all-wheel drive. The most powerful petrol is the M440i xDrive (xDrive denotes all-wheel drive in BMWs).

On the diesel front, there is the 420d, which offers the choice of rear-wheel drive or all-wheel drive. It's a familiar powerplant that we enjoyed in our long-term test of the 320d and puts out 190hp. Finally, there are the six-cylinder 430d xDrive and M440d xDrive, which will be launched in March 2021. All diesels comply with RDE2, so they don't incur the 4% BIK band penalty.

Initially, at least, the 4 Series will only be available with the M Sport or M Sport Pro equipment grades. A less sporty version has been shown, but may not make it to the UK.

M Sport cars get heated front sports seats as standard, as well as the latest version of iDrive with Apple Carplay, Android Auto, navigation and a 10.3in centre display and 12.3in digital instrument cluster, a 40:20:40 split folding rear seat and LED headlights and rear lights. A number of safety features such as cruise control, front collision warning, speed limit info and lane departure warning are also fitted as standard.

Buyers can upgrade to the M Sport Pro to get a choice of three further paint colours, 19in wheels and different interior trim.